Fes: Home To The Oldest And Largest Medina In North Africa

The city of Fes is another imperial city and former capital of Morocco. Fes is the second-largest city in Morocco, second only to Casablanca. It is located at the crossroads between Casablanca, Marrakech, Rabat, and Tangier. it is home to the largest and the oldest medina (old walled city) in the country. It was built in the 9th century and is one of the best-preserved medinas in the country, and possibly in the world. Around 90,000 people are believed to still live there.  The medina is a crowded labyrinth of narrow paths and passageways. Some are ridiculously narrow, and all are a complete assault to the senses. But somehow, it is as charming as it is overwhelming. Hiding inside are co-ops of artisans, a leather tannery, beautiful picturesque fountains, striking minarets, and the oldest university in the world. There are some incredible places in this area of perpetual pandemonium.

Let’s start our visit to Fez by getting totally, hopelessly lost! Within the walls of Fes El Bali is a maze of over 9,000 narrow lanes, most of which have no names. Listed by UNESCO in 1981 as a World Heritage Site under the name Medina of Fez, this is believed to be the world’s largest car-free urban area, not because of any environmental policy, but simply because the lanes and alleys are too narrow for cars. Many are even too narrow for bicycles, although you may meet the occasional donkey or mule. It is a wonderful place to wander at random not knowing what you will find round the next corner. Mosques, markets, tea shops, riads (traditional Moroccan houses with inner courtyards, some of which have been converted into hotels or restaurants), cafés, madrasas (Islamic schools) etc – the list goes on and on. 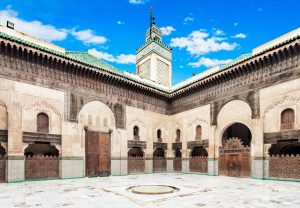 Located near the entrance to the old Medina of Fez (Fes el Bali) lies the Medersa Bou Inania. Built between 1350 and 1357 by the Merenid Sultan Bou Inan, it is one of the few religious buildings in the city that non-Muslims may enter. One a theological college for Muslim intellectuals, it is filled with stunning mosaics, wooden lattice screens, fountains, and zellij tilework 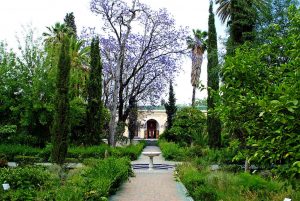 Inside the Medina lies the Batha Museum inside a Hispano-Moorish summer palace built in the late 19th century. It is home to a massive collection of traditional Moroccan arts and crafts, and a fantastic Andalusian-style garden at its entrance.

The Batha Museum is inside a Hispano-Moorish summer palace built in the late 19th century. The museum collection traipses through a selection of traditional Moroccan craftsmanship, with wood carved doors, wrought-iron work, embroidery, carpets, and jewelry all on display.

The centerpiece exhibit of the museum is the ceramics room, where the famous Fes blue ceramics, colored with cobalt, are featured. More interesting than the displays themselves is the building’s own original decoration and the lovely internal courtyard garden, which is full of shady trees and tall palms and is a true oasis within the city.

For shoppers, Fes el Bali is a paradise of local craftwork, with colorful Moroccan slippers, leatherwork, metalwork, rainbow-glass lamps, and tiles all displayed at stalls throughout the district.

The streets just west of the Qaraouiyine Mosque have the greatest concentration of shopping opportunities. This is also where you can visit the famous Chouara tanneries of Fes, one of the top things to do in this area. Here, you can watch the traditional dying of animal skins-the first step in making Morocco’s many leather products. Leather shops surrounding the tanneries provide bird’s-eye views over the area from their rooftops and are the best place to take photos.

Also located within the Medina are the famous Chouara tanneries. One of the oldest tanneries in the world, here you can watch traditional medieval methods of dying and making leather products. Shops surround the tanneries selling beautiful leather products. While the smell can get quite intense, it is definitely worth a visit.

The Merenid Tombs and Borj Nord

For the best views over Fes el Bali, walk up the steep hill just outside the city ramparts, to the Borj Nord area. Here, you’ll find a 16th-century fortress, home to an impressive arms museum. The collection of weapons includes some extremely rare pieces that represent armory from across the world. Amid the cache is the five-meter-long cannon (with a weight of 12 tons) that was used during the Battle of the Three Kings.

After viewing the arms museum, keep heading up the hill to the summit where a scattering of golden-stoned Merenid tombs sits. Although the tombs are in a heavily ruined state today, you’re here for the views, which take in the entire walled medina area and out to the green hills beyond.

Right amid Place Nejjarine, surrounded by metalworker workshops, you’ll find the Nejjarine Museum in an old fondouk, which has been transformed into a museum displaying Moroccan wooden arts and crafts. Here, in the salons where traders once slept on their trips to town are displays of engraved granary doors, dowry chests, and mashrabiya (lattice screen) window frames. The central courtyard of the fondouk, with its sturdy pillars and balconies decorated in carved wood and stucco detailing, is worthy of the entrance price alone and has been painstakingly restored to its original glory.

traditional wooden crafts, this museum houses a diverse collection of old tools and splendid wooden objects, including carved doors, ornate chests and cabinets, lattice screens, prayer beads, and musical instruments. Once an inn for traveling traders and merchants, the building itself, with its stucco detailing, is a work of art. 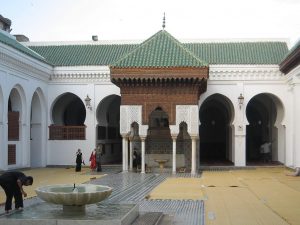 Built in 859 CE by Fatima al-Fihri, Al Quaraouiyine is believed to be one of the oldest universities in the world. Today, it functions as a mosque. While you cannot enter the mosque itself if you are non-Muslim, you can enter the recently renovated 9th-century library that is open to the public. You can also get a great view of the courtyard from the rooftops of nearby restaurants. 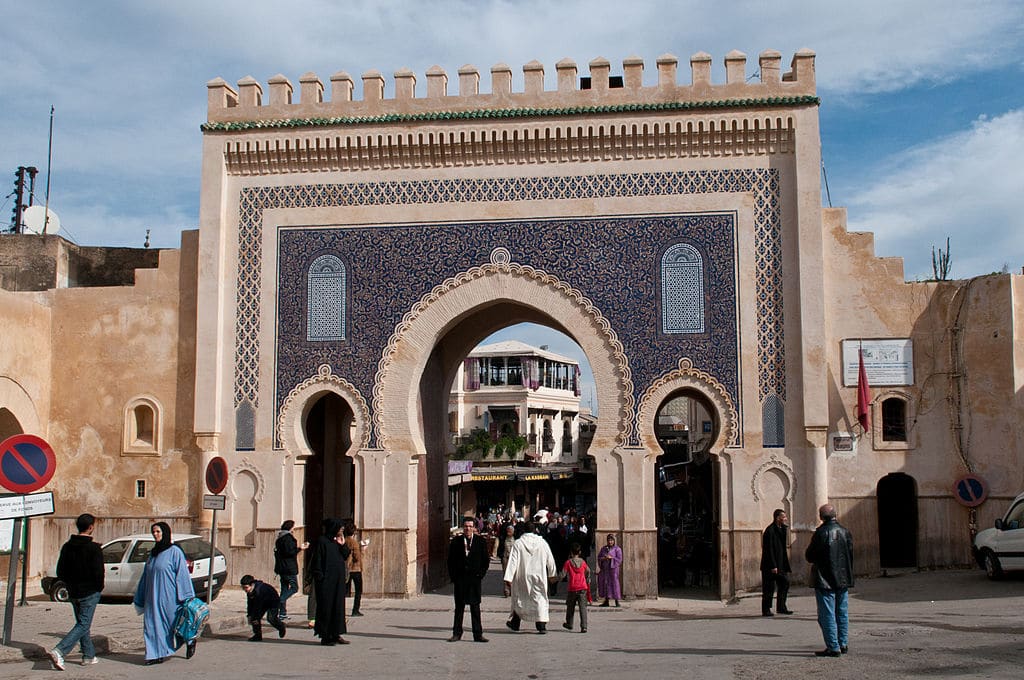 Bab Boujloud is the most famous gate . It is located west of the old town. Main door of the medina several cafes face each other, a constantly changing line of taxis in the center. People come in and out of the old town, take a break, adjust the frame, and chain-immortalize the beautiful blue door.

A few steps inside the medina you will find a small square with many snacks and restaurants . The hungriest and the least curious go no further to drink for food. Unless they’ve already gone around and come back to the starting point.