Top things to do in Morocco

things to do , Marvel at the Sahara Desert 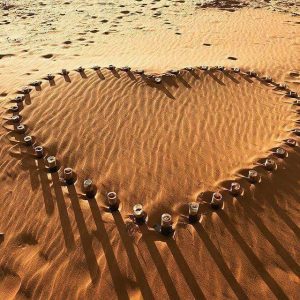 he biggest, and possibly best-known, hot desert on the planet, the Sahara Desert can be explored from a number of places in Morocco. The huge dunes of Erg Chebbi, near Merzouga, are a splendid sight. Camel trekking, camping, and photography are among the area’s top activities. Erg Chegaga, close to the town of M’Hamid El Ghizlane, is also impressive. Accessible only by camel, foot, or four-wheel-drive, the remote dunes see fewer visitors than their cousins at Merzouga. things to do in morocco

Visit the Tanneries in Fez 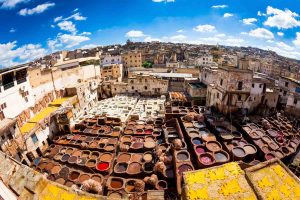 The Imperial City of Fez is famous for its leather products, most of which come from the leather bazaar in the old medina. The tanneries have been in operation since medieval times and haven’t changed much since. For the best view, head to the leather shops in the galleries above Chaouwara Tannery‘s central courtyard. From here, you can see the vats filled with colorful dyes; and the skins laid out to dry in the sunshine. The smell of the quicklime and pigeon feces mixture used to cure the hides can be overwhelming, but the sight of history in action more than makes up for it. Browse the shops themselves in search of authentic leather goods ranging from handbags to slippers. ​things to do in morocco

Stroll Through the Blue Streets of Chefchaouen 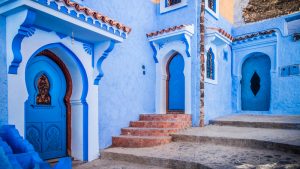 Situated in Morocco’s Rif Mountains, the sleepy town of Chefchaouen provides a welcome respite after the hectic pace of the country’s larger cities. Founded in the 15th century, the town served as a place of refuge for Muslims and Jews during the Spanish Reconquista; and again for Jews fleeing from Nazi rule during WWII. Today, it is famous for its bohemian atmosphere and the breathtaking beauty of its cobbled streets. The buildings are painted in a hundred shades of blue, and between them, one often catches a glimpse of the distant mountain peaks. Come to Chefchaouen for its scenery, and stay for its quaint craft markets, traditional guesthouses, and street-side cafés. ​things to do in morocco

Soothe Your Soul in a Hammam

Relax, cleanse, and ease away any aches and pains with a visit to a traditional Moroccan hammam. Many hotels and guesthouses have onsite hammams, and there are luxurious spas in most major tourist areas. For a more local experience, head to one of the numerous public bathhouses; you’ll find one in almost every neighbourhood around the country. 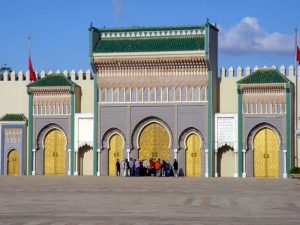 The entrance to Fez’ Palais Royale is a stunning example of modern restoration, but the 80 hectares of palace grounds are not open to the public. Visitors must be satisfied with viewing its imposing brass doors, surrounded by fine zellige (colourful geometric mosaic tilework) and carved cedar wood. Note the lemon trees to one side – tour guides are prone to plucking the fruit to demonstrate the juice’s astringent cleaning properties on the palace gates. The entrance faces onto Place des Alaouites. things to do in morocco 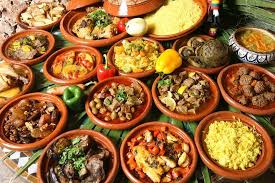 Moroccan cuisine is famous around the world for its fragrant spices and unique cooking methods. It is an amalgamation of many different influences – including the native cuisine of the Berbers, the Arabs, the Andalusians and the French. Sample iconic dishes like tagine and harira at street-side stalls in the city medina, then sign up for a cooking class to learn how to recreate the flavors at home. Many guesthouses or riads offer half or full-day culinary classes. The best ones take you into the market to purchase fresh ingredients, then show you the traditional ways to prepare them. Afterward, you’ll get to taste your creation, while the skills you learn are a souvenir that will last forever. 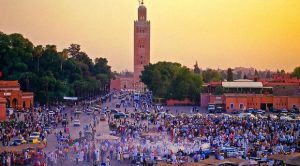 Five times a day, one voice rises above the Djemaa din as the muezzin calls the faithful to prayer from the Koutoubia Mosque minaret. Excavations confirm a Marrakshi legend: the original mosque, built by Almoravid architects, wasn’t properly aligned with Mecca, so the pious Almohads levelled it to build a realigned one. When the present mosque was finished by Sultan Yacoub El Mansour in the 12th century, 100 booksellers were clustered around its base – hence the name, from kutubiyyin(booksellers). things to do in morocco

Overnight in the Sahara Desert 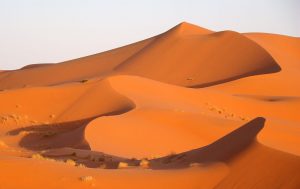 The Sahara Desert is a magical place to spend a few nights. Use the eastern town of Merzouga as your gateway to the spectacular Erg Chebbi dunes (recognizable as the backdrop for movies like The Mummy and Sahara). From here, you can book a camel safari or a 4×4 tour, both of which offer the chance to spend the night under the stars or in a traditional Bedouin village. Sunsets and sunrises are spectacular in the desert, transforming the dunes into dreamlike landscapes of ochre and red. After dark, the stars are blazing constellations unspoiled by the pollution of civilization. Keep an eye out for nocturnal desert creatures, including the jerboa and the fennec fox.

Unwind in the Majorelle Gardens 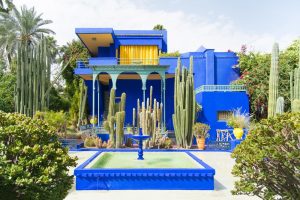 Visitors to Marrakesh can find peace and quiet in the beautiful Majorelle Gardens. Located northwest of the medina, the gardens were designed by French painter Jacques Majorelle in 1919. Since restored by Pierre Bergé and Yves Saint Laurent, they now represent an idyllic oasis filled with slender palms, exotic botanical flowerbeds, and tinkling water features. Majorelle’s workshop has been converted into a small museum about Islamic Art, while Yves Saint Laurent’s ashes were scattered here in 2008. Pack a picnic or a good book and spend a few hours relaxing in the garden’s blissful shaded areas, or step out into the sunshine to appreciate the full splendor of its colorful blooms. things to do in morocco 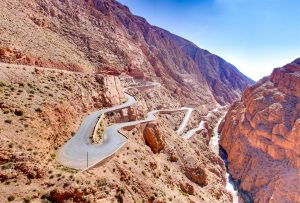 The Atlas Mountains stretch over 1,500 miles, from the west coast of Morocco to Tunisia. The High Atlas region is home to North Africa’s highest peak, Jebel Toubkal, a top destination for hikers with a summit of 13,671 feet/ 4,167 meters. Most Jebel Toubkal treks start from Imlil, a mountain village located an hour’s drive from Marrakesh. Although it’s not compulsory to walk with a guide, it’s definitely recommended. There are simple accommodations along the route, and the best time to attempt the summit is in April or May when the weather is pleasant and rains are at a minimum. If you don’t feel like climbing the peak, there are many more sedate hikes in the surrounding area. things to do in morocco